When making music it can help to know how music theory works. That’s why we’ve put together this Essential Music Theory cheat sheet-style guide for artists which details everything from note names and accidentals to scale degrees and solfege syllables, important scales and more.

This free unit covers the most essential music theory knowledge necessary for producers, songwriters, instrumentalists, singers and others. If you’d like to learn to create world-class music first hand from our industry professional instructors, then be sure to enrol on a Point Blank course. Plus, we’re currently offering 25% off our selected online and LA courses using the codes ONLINE25 and LA25. Sign up to a Point Blank course by 8th November to take advantage of this huge offer.

The most important elements within music are: pitch, rhythm, dynamics, timbre, and form.

A sound source actually moves air molecules in compressions and rarefactions and creates a a specific frequency, an exact rate of vibration , which is perceived by our ears as a distinct pitch and known in music as a note. Pitches can be described scientifically in cycles per second (cps), more commonly known as Hertz (Hz). The standard pitch most modern musicians tune to is 440 Hz, known as A=440, which means that when sound waves hit our ear drum at 440 times each second, our brain perceives a pitch which musicians identify as the musical note A.

However, the first note most musicians learn to find on the piano is called middle C (also known as C4). To find middle C, start by noticing how black keys come in repeated sets of two and three. We can look for the set of two black keys in the middle of the keyboard and find the white key directly to the left of the two black keys. This is middle C.

The first seven letters of the alphabet ( A, B, C, D, E, F, and G ) are used to name musical notes. The sharp ( ♯ ) and flat ( ♭ ) symbols are also used in certain note names; they are known as accidentals. The sharp raises a note, and flat lowers it. The black keys on the piano are named C#, D#, F#, G# and A# – there are no black keys reserved for B# or E#. Alternatively, we can name the black keys with flats: D♭, E♭, G♭, A♭, and B♭, and see how there are no black keys reserved for C♭ or F♭. This is easiest to grasp by looking at the piano, and observing how there is no black key found between the notes B and C, or between E and F. 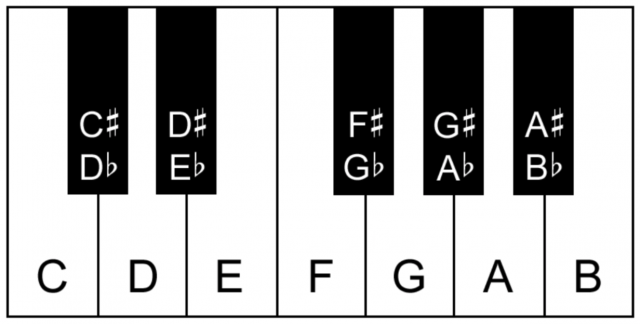 THE TWELVE NOTES IN MUSIC

As seen above, there are twelve possible unique musical notes (a.k.a. “pitch classes”) and they repeat in “octaves” – a full-size piano has 88 keys and consists of about 7 1⁄2 octaves. Each of the twelve possible notes can be spelled differently using multiple appropriate names, depending on its context. Out of these twelve possible notes, only seven of them are found in the major scale. If we think of one octave as a set of twelve boxes (rather than a keyboard), we can clearly see which seven boxes are selected to form the major scale:

TWELVE NOTES IN THE OCTAVE – SEVEN IN THE MAJOR SCALE

There are three main labels we can apply to musical notes:

Letter names never change their position on the keyboard. However, scale degrees and solfege syllables are movable. Scale degree 1 will not always be C; it may be F, Bb, or any other one of the twelve possible pitches that we decide to start our major scale on!

Solfège syllables are essentially easily-singable equivalents to scale degrees, and they are also movable. Do will not always be C; it may be Eb, F#, or any other of the twelve possible pitches. However, Do is always scale degree 1, and vice versa.

One octave of piano keys, labeled with note names and scale degrees: 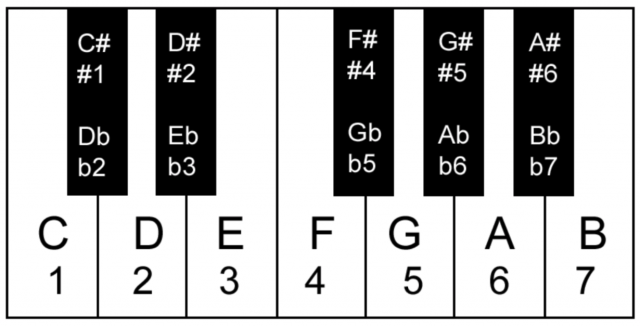 One octave of piano keys, labeled with solfege syllables next to their equivalent scale degrees: 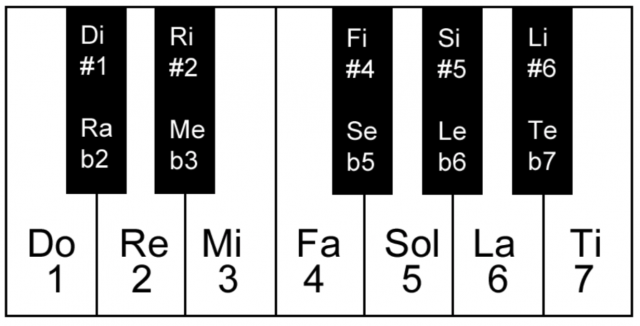 HALF STEPS AND WHOLE STEPS

A whole step is equivalent to two half steps. Whole step is the name given to the distance between two notes that have one and only one note in between them. Whole step is also sometimes referred to as a tone.

A scale is a sequence of musical notes conceptualized in ascending and/or descending order. How do we group notes together into scales? Let’s start with the major scale. The major scale has birthed the majority of popular music, and as such it is the default scale for beginning a study of music theory. Learning to build it is the first real benchmark in one’s understanding of music theory. To create a major scale, we pick any starting note, known as the tonic, and we follow it with this magic formula of whole steps and half steps:

As you can see, the major scale consists mostly of whole steps, with half steps appearing only between the 3rd and 4th notes of the scale, and the 7th and 8th notes of the scale. Also, the 8th note in the scale is an octave repetition of the 1st note in the scale (scale degree 8 = 1) . This means that there are only 7 unique pitches in the major scale, even though we frequently perform it as an 8-note scale which starts and ends on the tonic note. All scales repeat in higher or lower octaves, ascending or descending as far as you like.

Now that we know how to build the major scale, we can create a table which spells out the note names found in every possible major scale. The main rule to remember when spelling notes within a major scale is that we cannot repeat any letter in our note names. For example, F and F# cannot belong to the same scale; we must either rename F as E# or rename F# as Gb. It is also important to remember that a major scale can contain either sharps or flats, but not both at the same time. 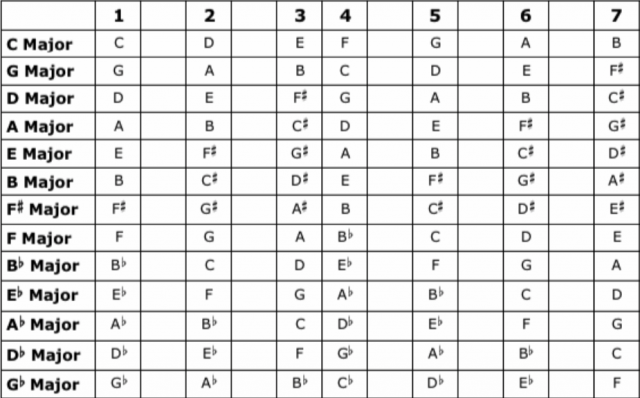 As you can see above, each major scale has a unique number of sharp or flat notes included:

This means that we can describe a major scale, also known as a major key, by indicating the number of sharps or flats it has. This is known as its key signature.

And here is a comprehensive list of more scales you may wish to explore:

Now you’ve got music theory down to a T, why not put it into action by writing your own song. If you need any help composing in electronic DAWs using state-of-the-art studios, software and expertise, don’t hesitate to check out our courses in London, LA and Online.