These days, the reality is: a blockbuster film score can be produced entirely from the comfort of your own home studio — if you have the right gear and knowhow. Check out 10 of the best electronic film scores of all time to hear what the greatest modern film composers can generate with the power of their synth arsenals.

If you’d like to learn how to produce your own soundtracks and see your music against the backdrop of stunning visuals, we’d highly recommend checking out our courses in Los Angeles, London and online. Plus, we’re currently offering 25% off LA courses until 28th September using the code LA25.

Now, without further ado, jump into the list below.

Young chiptune artist Richard Vreeland (aka Disasterpeace) turned in this stellar pulsating synth score for the supernatural horror film It Follows in just three weeks. Here’s what he had to say about electronic film music: “Synths create sounds that are not always analogous to real-life sounds, so they do a good job of being strange and harder to pinpoint, which excites the imagination and is perfect fodder for writing scary music.”

Dynamo composer Cliff Martinez took a very “sound-designerly” approach to crafting his slick score for the Los Angeles action movie Drive. He used popular synth plug-ins and sound libraries to emulate his electronic idols Kraftwerk and Tangerine Dream and bring out the softer, naïve, romantic sides of Ryan Gosling & Carey Mulligan’s characters. He also made strategic use of the Cristal Baschet, a multi-timbral percussion instrument invented in 1952 and made out of metal and glass rods. Here he is discussing his approach:

Brad Fiedel’s riveting, inexorable rhythms are the perfect sonic representation of James Cameron’s cyborg assassin The Terminator. The main theme’s memorable melody is the stuff young Hollywood dreams are made of. In some small way, this powerful electronic music so deeply lodged in the collective unconscious probably even helped Arnold Schwarzenegger win his seat as the governator of the great state of California.

For the experimental German thriller Lola Rennt (translated as Run, Lola, Run) the director Tom Tykwer himself went hands-on to compose the fim’s score, which truly supports the character development and action throughout. Lead actress Franka Potente (a talented singer in her own right) lent her own vocals to several cuts used on the official soundtrack, a landmark moment in classic ‘90s techno music.

The psychodrama Requiem for a Dream is a tragic first-hand chronicle of the perils of drug addiction. Director Darren Aronofsky said “it’s a monster movie — only when something goes bad do you hear the music.” Composer Clint Mansell channeled the great minimalist composers Steve Reich, Terry Riley, and Pauline Oliveros to create its bone-chilling score, performed by contemporary string ensemble Kronos Quartet.

After Chariots of Fire won him the Oscar for Best Original Score in 1981, the Greek synth trailblazer Vangelis immediately got to work writing music for Ridley Scott’s futuristic film noir classic Blade Runner. Highly inspirational and influential in the history of electronic music, the eclectic score makes prominent use of the Yamaha CS-80, the Sequential Circuits Prophet-10, and the Roland Jupiter-4 & CR-5000, while also integrating a variety of percussion including gamelan, glockenspiel, gongs, timpani, and tubular bells.

Industrial genius and Nine Inch Nails founder Trent Reznor has been director David Fincher’s first-call film composer since the 2010 Facebook origin story movie The Social Network. Collider called it “the best film score of the decade,” and we agree. Reznor and co-composer Atticus Ross won the Academy Award for Best Original Score, and went on to score Fincher’s other hit movies Bird Box, Gone Girl, and Girl With The Dragon Tattoo.

Here in Hollywood, connections you make and skills you learn at Point Blank can be the just what it takes to get your foot in the door if you want to make music for the big screen. The Composing for Film & TV program at Point Blank Los Angeles is taught by Dan Light of Hans Zimmer’s Remote Control Studios and Grant Cornish of Amazon Studios.

Black Friday Sale: FL Studio ALL Plugins Edition $399 USD, upgrades up to 82% off! 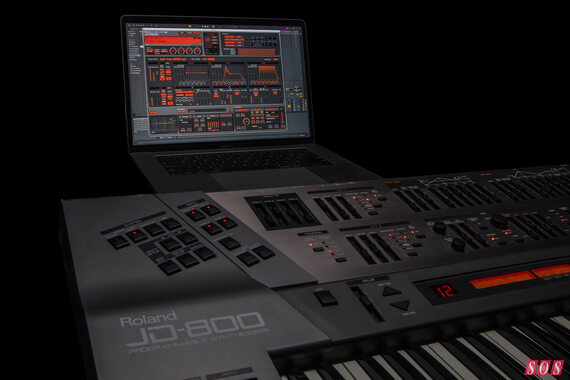