If you’re looking for production tips from big name producers you came to the right place! In the first part I'll explain how to use Reddit effectively and smartly. In the second part of this article there will be an ultimate list of Reddit AMAs done by influential producers, including production tips!

I will regularly update the list so bookmark this page so you don’t miss out. If I missed any amazing AMA’s done by a producer please comment and let me know!

Continue reading to learn how and why you should be using Reddit as a production resource + exclusive interview w/ Electric Mantis talking about Reddit and his career!

(AMA LIST IS AT THE END OF THE BLOG!)


How can I become an amazing producer in little time?

Firstly, there is no way you can wake up an amazing producer. You have to put in the hours.  But it’s not just about the sheer number of hours in the studio, but rather the quality of those hours.

Reddit is a site where you can find the information you’re looking for, but it’s also a place where you can interact and grow yourself as an artist by being involved with the online community. Think of it like the Cymatics’ Facebook group which offers an amazing pool of knowledge.


The artists that you look up to have been producing for YEARS. What does that mean? It means that they’ve put time and effort into becoming a great producer. Where do producers share their knowledge? Places like Reddit.

Bigger name producers will do AMAs (Ask Me Anything) on Reddit talking about their workflow, how they made a track, how they process certain sounds, etc.

Learn from the guys with years of experience on their belt, this is crucial for gaining experience faster because learning from them is faster than learning strictly by yourself. Growth hacks aren’t just for marketing; it applies to production as well.

That doesn’t mean copy EXACTLY what the pros do. If X Producer says he used a Sausage Fattener on his synth channel and cranked up the gain by 20%, you shouldn’t assume that a 20% gain should be applied to your channels as well. Your mix is different from the next producer. Read about techniques that big name producers use and apply that with your own sounds, but always trust your ears and make sure what you’re doing sounds good.


Electric Mantis And His Career


So you’re probably making tracks in your bedroom and spending countless hours honing your craft everyday. Electric Mantis was in the same position two years ago and now he’s on tour playing shows in NY, CA, etc. I got in touch with him and here’s what he said:

Around two years ago, one of my songs took off through a frontpage post and I've been pursuing music professionally ever since. Before I had a following, I remember posting all of my songs to various subreddits, often times just for insight and critique.

I posted Flips and Flops, Drips and Drops to r/futurebeats, claiming that I pulled inspiration from Djemba Djemba. I had no intention of catching his eye or reaching out to him, but I can only assume that he was browsing r/futurebeats or searched his name on Reddit and found my post. He then reposted the song onto his Soundcloud which was the first recognition I had really gotten up until that point, so I was absolutely pumped. I then made a post on a bigger subreddit r/music about how this artist, who was a massive inspiration, discovered and reposted me through a small Reddit post. This was the post that hit the frontpage and changed my life.

Reddit gets around six million page views per day. With that many people, it's entirely possible that your favorite musicians browse it, electronic music producers more than anyone since they're glued to their computers all day. Hell, I remember stumbling across old posts by Harley Streten a.k.a. Flume where he was asking for advice and posting updates on his songs before he blew up. He clearly browsed these smaller music subreddits just like many bigger artists do in search of new music.


“My advice is to post your songs, but also be a part of the community. Offer constructive criticism to others if they ask and take part part in discussion. There's A LOT to learn from other like minded producers and on top of that, you just might hit the right ears one day”


Subreddits are basically categories of threads where you can narrow down what kind of content you are looking for! A pro tip is to use the “search” bar in a subreddit to find specific information.

Let’s say you want to know about a plug-in or tips on how to use a certain effect. Go to the subreddit for EDM Production.

Then, go to the search bar and make sure the “limit my search to” box is checked, so you will be looking for info that’s only been posted in the EDM production subreddit! 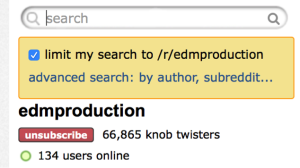 Your journey towards success awaits! All the knowledge is out there! Read, learn, apply, put in the hard work and you’ll be finding yourself a better producer day by day!

If you’re looking for music production and marketing tips from all the big music producers like Diplo, Borgore, Dillon Francis or NGHTMRE, then you should check out this article. Below there is huge list of AMAs (Ask Me Anything) of popular music producers, and we took the most useful tips and wrote them down for you.

If you’ve come across AMAs that you’d like to see on this list, let us know in the comments below!

Getting Started With The Buchla 266t Source Of Uncertainty Eurorack Module